In the sixties and early seventies racers raced mostly for fun and were not very sophisticated in figuring out how to make their race cars go faster. In those days everyone built their own engines, race cars, and even their own trailers and haulers for their racing efforts. It was always difficult to determine whether a given change in an engine or chassis was really better or not due to all the other variables present in the race car environment. Building and tuning your engine was a process of trial and error plus a lot of “seat of the pants” testing. The only believable, reliable tuning instrument was a stopwatch. As time marched on and everyone got more experience, more testing tools became available. Manually operated engine dynamometers were used to try and figure out how to build a better, more powerful engine and get a jump on the competition. These dynos used 6 or 8 people watching their respective gauges as the engine was run through a range of rpm which was similar to the rpm range of the particular type of racing being done. The advent of personal computers and associated technology further advanced the process as well as vehicle data acquisition systems which became popular with the more serious racers. In the present day all the data is readily available on laptop computers for analysis and tuning of the whole process. Even the simplest dynamometer rooms are light years ahead of the medieval sixties. One aspect of this engine dynamometer testing has not really been addressed at current day levels of sophistication.

When an engine is going to be tested to determine if it is more capable or less capable of powering a race car, the test should reflect similar conditions to what is seen in the race car. The result of such a test should be accurate and, more importantly, repeatable, test after test, day after day, month after month, and year after year. The major unit used in the current day to test race engines is the water brake or hydraulic absorber. Various companies manufacture systems using fancy control schemes and fancy data analysis techniques to develop, smooth, and refine the actual measured or raw data into something which is supposed to represent a repeatable test result. When an engine is swept through an rpm range and the torque is measured “on the fly”, the observed torque depends on certain factors.

These factors include water temperature, oil temperature, atmospheric conditions, and most importantly, the length of time at which the engine remains at a given load level or, more simply, the rate of sweep. The rate of this sweep is a very tricky value in itself for a control and measurement system to accomplish accurately and repeatably. Once the rate is controlled accurately, the second, tricky problem is to measure the observed torque accurately “on the fly”. Controlling and measuring these two parameters very accurately, test after test is the reason most water brake dynamometers have trouble giving repeatable results. There is one simple method of measuring and controlling these difficult variables and that is by utilizing energy methods through the use of an inertia wheel engine dynamometer.

The Accellodyne(r) dynamometer is such an inertia engine dynamometer. Beginning in 1968 HG Associates, Inc. hand built the first model of this type of dynamometer in Kimberton, PA. It never operated at that location because before it was finished the property it was set up on was sold and the whole project had to be relocated to the current location in Limerick, PA. After many designs and redesigns, it finally ran for the first time in 1985 and has been running there ever since. This system has variable inertia and a custom designed and built high speed data acquisition system which has 48 channels of data inputs. The fuel measuring system can measure six channels of fuel flows at high speed. Full or part throttle power curves can be measured with extreme accuracy and repeatability. Power curves can analyzed to determine in what rpm range the engine under test should be operated. Driveability problems like stumble, over rich and over lean accelerations can also be found immediately. Ignition timing can be measured and adjusted to produce maximum torque with minimum timing and prevent burn downs due to over advanced timing “discovered” by water brakes. Cam timing designs and changes can be measured and analyzed accurately. Acceleration time at full or part throttle from one rpm to another rpm can be measured accurately and repeatably. Engines can be tested from 1500 rpm and up whereas most water brakes cannot hold a steady load below 4500 rpm. A lot of racing gets done below 4500 rpm on slick dirt tracks with extreme gear ratios to control wheelspin. In the final analysis, what is found on the Accellodyne(r) is always found to be true at the track, good or bad, unlike many, many water brake test systems which give data unrelated to what really happens under racing conditions. 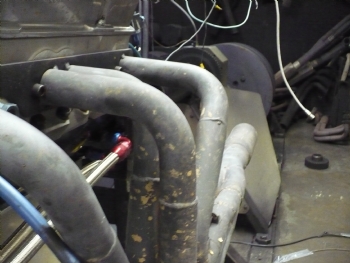 For work done on the engine being tested, our shop labor rate is $95 per hour. This is only if you need
work like cam changes, injector work, carb work, header fab, etc. other than the usual installation and testing while on the dyno

Don't forget these items when you schedule testing: